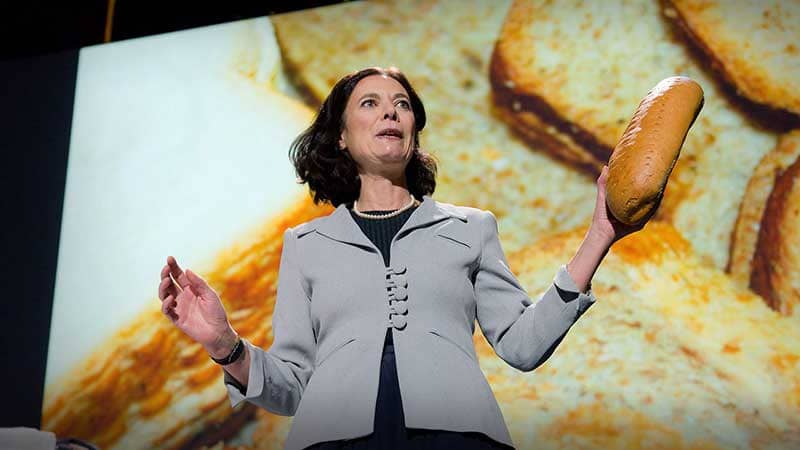 “Louise Fresco shows us why we should celebrate mass-produced, supermarket-style white bread. She says environmentally sound mass production will feed the world, yet leave a role for small bakeries and traditional methods”- ted.com

She’s talk was very unilateral, and she missed a lot of details, and that’s why there are a lot of interesting comments.

Here are some good comments:

“Stop buying mass produced bread that somehow have 15-20 ingredients instead of: flour, yeast, water ,salt and whatever niceness you feel like putting in it.” – Karl Andre Bru/source,TED

“Well said! I wonder how much this womam was paid to give this talk? As you say bread has only four ingredients. Ideally they should be organic as other wheat is sprayed I don’t know how many times and retains the dangerous toxins in the valuable bran layers. White bread is a non food in fact a consultant surgeon friend of ours actually called it poison. People who eat white bread are likely to supper from diverticular disease caused by constipation and ultimately they may even get cancer of the bowl which is the chemical manifestation of constipation.” – Neville Gay/source,TED

“Wonderbread(white sliced bread) may be a good solution in an underdeveloped country where people are starving to death. In the Land of Choice (a/k/a USoA), the qualitative difference between the white bread and whole grain virtually punches you in the face…” – AJ/ source nextnature

“…the point is still very valid – that population growth will only be aggravated by having more food available. Though not the most humanitarian perspective. It’s a very likely and unfortunate case.” – meemers542 / source – YouTube