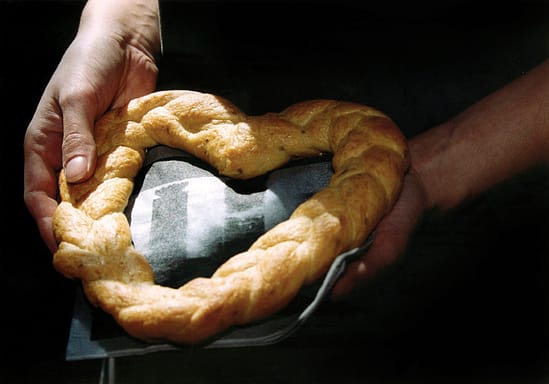 “Dedicated to the memory of my father who was killed in

An exhibition / public art project was opened on 16 March 2002 in the small town of Manciano, Italy. In the streets and in the main square, Manciano residents set up tables on which were served local wine and culinary specialties. In addition to all this food, visitors could also try heart-shaped rolls that were prepared by a local bakery according to my instructions. The rolls were served on napkins that were printed with photographs taken in Sarajevo between 1992 and 1995 – these images were taken from the documentary film, “Do you remember Sarajevo.” That day, over food and drink, with mixed feelings of happiness and sadness, we spoke of love and war, life and death; and we remembered Sarajevo. Photographs documenting this work are still displayed in the bakeries of Manciano.”